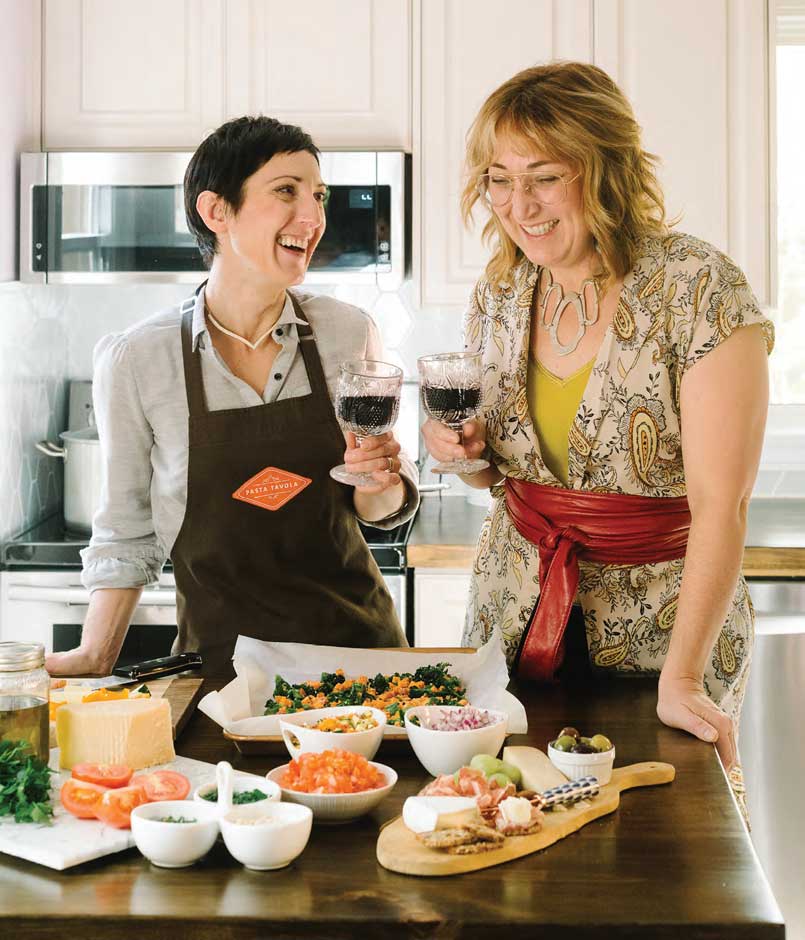 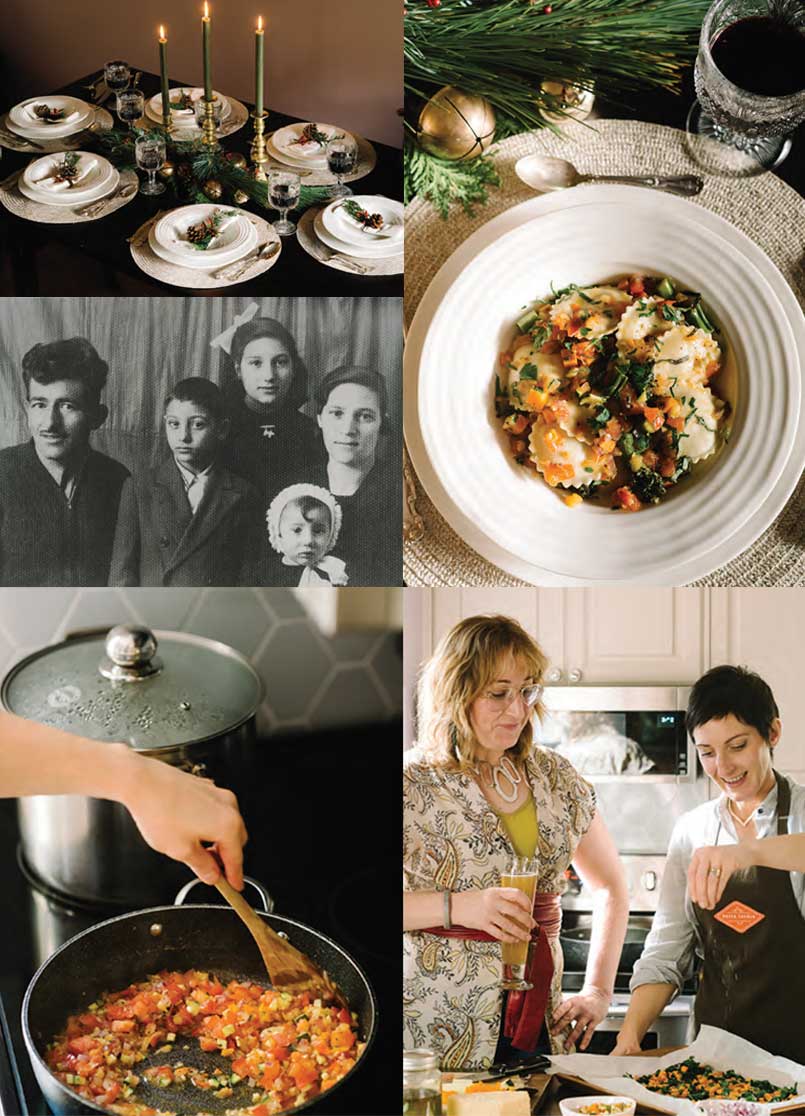 Belleville, Ontario: birthplace of NHL Hall of Famer Bobby Hull, pop star Avril Lavigne – and some of the best ravioli outside Abruzzo?

The story really begins in 1948, when Paula and Victoria’s mother, Maria Ferrone, was just two years old, landing at Pier 21 in Halifax from the town of Ofena in the L’Aquila province of Abruzzo.

It was a time of great immigration from Italy to Canada, as thousands were drawn from war-ravaged Europe to vast pristine landscapes and a multitude of opportunities. For the Ferrone family, the journey would continue on to Sault Ste. Marie, where the men found plenty of work in mining and manufacturing.

Although Maria would eventually make her way to Toronto for university and settle there – it’s also where Maria would meet Paula and Victoria’s father, John Watts – every summer they would all spend two or three weeks back in The Sault with the extended family of aunts, uncles, cousins, and perhaps most importantly, Nonna, the girls’ grandmother.

“The whole road was populated by our family,” recalls Victoria. “We would go from house to house, visiting, cooking, eating.”

“The backyards were all connected by one big, shared vegetable garden,” says Paula. “We would just go out back and pick the tomatoes and veggies, come in and make the sauce, then we would go down to our Nonna’s second kitchen in the basement, to the pasta table to make pasta.”

The pasta table. Pasta tavola. It’s a fixture in many Italian kitchens. It might be a specially constructed table strictly for mixing, rolling, filling, and cutting pasta, or it might just be a kitchen table with a wooden pasta board laid on top. But it was the place where everyone gathered and learned the art of pasta making from the matriarch.

“Nonna taught us to prepare homemade pasta from scratch,” says Victoria. “And to share with family and friends; to gather around the pasta table – the pasta tavola – and this is still the heart of our business.”

Paula and Victoria grew up in the GTA. They did their studies and embarked on successful careers – Paula in Japan working in corporate HR, and Victoria as a lawyer – long before they even dreamed of turning their shared history and love of food into a business. But perhaps inevitably, sisterly conversations came around to the idea – the dream – of Pasta Tavola, so the two cooked up a plan.

As soon as Paula came back to Canada from her eight-year stint in Japan, she enrolled at the Culinary Institute of Canada in Charlottetown, P.E.I. From there she would send recipes to Victoria to replicate and taste test at home, all while she and Victoria envisioned and constructed the business plan and formally established the company that would be Pasta Tavola.

“From the very beginning, we had plans to take this national with distribution,” says Victoria. So when Paula graduated in 2010, Victoria flew to Charlottetown to pick her up. “We loaded all her stuff into a car,” recalls Victoria. And over the 18-hour drive back to what was now home – Belleville – the two conspired to build their pasta empire and fulfill their dream.

They introduced their small-batch, handmade raviolis at local farmers’ markets, where they were a hit, selling out weekend after weekend. But they dreamed of bricks and mortar, and true to form, by the end of 2010 they had their shop on Front Street in downtown Belleville.

“We opened up in the middle of one of the worst blizzards that winter,” recalls Victoria. “But the reception was so great: we had a line-up and we sold out. We were totally overwhelmed but in the best way possible. I was out front, and Paula was in the back making ravioli as fast as she could to keep up with sales.”

They soon outgrew their shop and production kitchen, and after closing it down in 2020, they turned to co-packers, expanding their wholesale division nationwide. “We had expanded the space already and still we had outgrown that location,” says Victoria. “And then at the same time there was the pandemic, which gave us a nudge to close, but really, it’s like the stars aligned. I believe there are opportunities even in difficult times.”

Adds Paula, “Our retail was a great way to gain insight into consumer trends, and it provided us with invaluable insight that fuelled our growth.”

“Our growth has been fairly quick,” admits Victoria. “But it also has to be grounded; we are 12 years in the making. We have distribution in every province now but are still very hands on, and we’re still working all the time. Although the business model has changed, it’s still the same for us. Our workforce has gone from two – us! – to five in our core team, with many more across the country: brokers, distributors, co-packers.”

“Sure, we work with food scientists now,” says Paula, “but at the core our business is still about great, authentic pasta and sauces. We’ve been able to scale up without compromising quality.”

“Besides,” adds Victoria, “we never set out to compete with cheaper brands. We’ve been intentional about every step, every product and ingredient.”

“We started with an idea, then a table and a cooler at the local farmers’ market,” says Paula. “And now that we’re operating on a national level, our roles have changed, grown. I’m responsible for research and development, keeping up with food trends; and Victoria is more in charge of the business and logistical end of things.”

A great part of the brand’s success has to do with the raviolis’ ratio of filling to pasta, and the pasta dough itself. It’s a superior formulation that’s thin and tender. “We wanted our pastas to taste real,” says Victoria. “We don’t add any breadcrumbs, no fillers, no artificial anything, no preservatives.”

“We really recognize how food serves us in our lives,” adds Paula. “So we are very intentional: our flours are custom blends, and while we are trying to replicate the flavours of our youth, we also recognize that there is an evolution in food, in what consumers will eat, and that what they demand is changing. And we believe in transparency, in traceability. Certification has been important for us too: non-GMO, and certified plant-based. We are bringing innovation to what is a very traditional product; for example, in our new plant-based line we use Canadian-made faux meats and combinations of flavours and ingredients that are different but accessible.”
“Our recipes were inspired by the greater experience of eating and cooking with Nonna and the extended family,” says Paula. “But we aren’t using her recipes; we have to create our products with trends, costing, and ingredient availability in mind.”

Still, it always comes back to quality. “When we created the raviolis,” says Victoria. “We set out to make that melt-in-the-mouth thin dough-to-filling ratio, tender and not chewy.” And even though it’s understood that everyone’s nonna makes the best pasta in the world, “Everyone back home is so proud!” says Victoria. “We even send cases to Nonna!”

“At the core of our business is authenticity, food and eating,” says Paula. “It’s what brings families together.”

This easy sauce pairs well with any short pasta or cheese-filled ravioli. In the summer, use what’s in the garden: zucchini, eggplant, peas, fresh garden herbs; in fall: roasted squash, roasted pumpkin, kale. In winter, roasted sweet potatoes or cooked beets are delicious, and in spring go wild with asparagus, fiddleheads or artichoke hearts.

It’s been five years since the idea of opening a brewery between three friends happened at a weekly potluck. For husband and wife Bill and Gretta Barnwell along with friend and business partner Rick Stinchcombe, navigating permits, kids, licences, recipes, COVID and all the logistics of opening a brewery has been, according to Gretta, “The most rewarding but also frustrating, exhausting, fun, amazing, test of patience and perseverance of a trip for all of us.”

And the trio haven’t arrived at the end of the journey yet; there’s still a taproom to be built, which should be open this year.

Located in a century home in downtown Belle – ville, this small-batch craft brewhouse sources as many ingredients as they can locally. “Many of our beer-making ingredients come from farmers and producers in our region,” says Gretta, “including Pleasant Valley Hops in Prince Edward County, and Barn Owl Malt just north of the city.”

“They’ve been big supporters of ours,” says Victoria Watts. “Paula and I have enjoyed their beers, and we like how they pay homage to the area with their branding.”

For husband and wife, Rich McFarlane and Kailey Bosch of Melrose Market Garden, all the hours they put into their five acres are about feeding family, friends, and community the freshest, healthiest, most natural foods possible.

The couple, who have been farming Rich’s family homestead in Shannonville since 2015, are true believers in regenerative farming. Eschewing synthetic fertilizers, GMOs and pesticides, they nourish the soil and crops with compost while using natural alternatives for pest control – sometimes that means picking tomato hornworms off the vines, one by one. And with her background in holistic nutrition, this approach is important to Kailey. So is spreading the gospel. “We’ve developed seed starting kits,” she says. “And we host plant-alongs and sell seedlings in the spring to help our community grow their own veggies!”

Paula and Victoria Watts of Pasta Tavola are big fans. In the early days, when Paula was hand-making everything, they were able to incorporate some Melrose Market Garden produce into their products, and, says Victoria, “They have the same values as us; they’re small but mighty!”

Husband and wife owners of Cheer Farms, Dave and Loraine grew up living or working on family farms, and even though they both had full-time jobs at the time, the couple took a leap of faith and purchased a 38-acre apple orchard in 1996.

Now, 25 years and two kids later, Cheer Farms is so much more. Just minutes from downtown Brighton – on old Highway 2, they added more land – 150 acres now – and built a thriving market, bakery, seasonal ice cream shop, orchard, and strawberry, pumpkin, and sweet corn farm. All the pastries, pies, breads, preserves and frozen meals are made from scratch with the farm’s own produce, by Loraine and daughter, Jennifer, using old family recipes. Also in the shop are products from Pasta Tavola. “We carry the wonderful Pasta Tavola products,” says daughter Kim Cheer. “And we sell it all the time! They have been a great asset to our business and people love it!”

The feeling is mutual. Victoria and Paula Watts are impressed by the Cheer family. “What we admire about this family business is how they’ve grown – they’ve grown their land, their shop, and their growing seasons.” 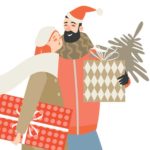 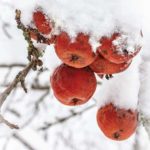 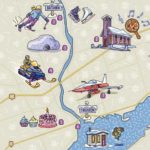 A Snow day in Quinte West 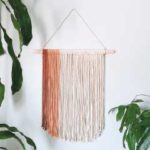 A Showcase Of Locally Curated Products 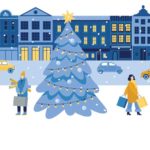